We're delighted to announce our first panel of the year: on Science Fictional and Fantasy Poetry. This event, in partnership with the Science Fiction and Poetry Association, will feature seven poets, and will be moderated by our own Wendy Shaffer. It's on Feb 26th, 2022 at 5 pm Pacific Time. Now, meet our panelists! 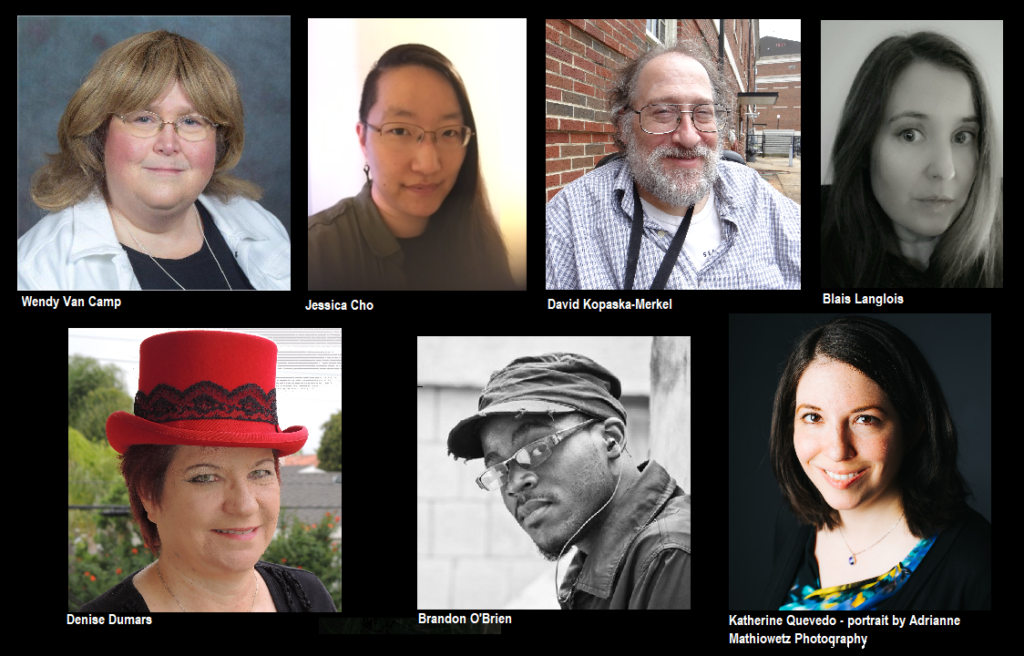 Wendy Van Camp is a poet, author, and artist. A graduate of the Ad Astra Speculative Fiction Workshop, Wendy has won Honorable Mention at the Writers of the Future Contest, is a twice nominated finalist for the Elgin Award, and nominated for a Pushcart Prize in poetry. Her short stories and poems have appeared in magazines such as: "Starlight Scifaiku Review", "The Flying Saucer Poetry Review", "Quantum Visions" and "Far Horizons". She is the poet and illustrator of "The Planets: a scifaiku poetry collection" and the editor of the speculative poetry anthology "Eccentric Orbits". She writes science fiction, regency historical, and memoir. Find her online at http://nowastedink.com

Jessica Cho (pronouns: they/them) is a Korean American writer of SFF short fiction and poetry, currently living in New England. Their poetry has appeared in Fantasy Magazine, Fireside, ApparitionLit, Anathema and elsewhere. In 2020, they won the Rhysling Award for their poem “Taking, Keeping,” published in ApparitionLit. More information and occasional updates can be found at semiwellversed.wordpress.com or on Twitter @wordsbycho

David Kopaska-Merkel is reticent about his former lives, but his resemblance to a well-known Assyrian bust gives one pause. In this life, he won the 2006 Rhysling award for best long poem (collaboration with Kendall Evans), and edits Dreams & Nightmares magazine (since 1986). He has edited Star*line and several Rhysling anthologies, has served as SFPA president, and is an SFPA Grandmaster. His poems have been published in Asimov’s, Strange Horizons, Mythic Delirium, Night Cry, and scores of other venues. Some Disassembly Required, his latest poetry collection, comes out this year from Diminuendo Press. @DavidKM on Twitter.

Blaise Langlois. Emerging author and Pushcart Prize nominee, Blaise Langlois, will never turn down the chance to tell a story. She wears many hats and when she isn’t busy being a teacher, mother, or wife, you will usually find her (just before midnight) feverishly scratching out ideas. She has a penchant for things of a speculative nature and her short fiction and poetry can be found through: Eerie River Publishing, Black Hare Press, Space and Time Magazine, Black Spot Books, Lothlorien Poetry Journal, the Science Fiction and Fantasy Poetry Association and Ghost Orchid Press. You can learn more by visiting: www.ravenfictionca.wordpress.com

Denise Dumars. In addition to publishing hundreds of articles, poems, short stories, and reviews in magazines and journals, Denise Dumars has published four volumes of poetry, two volumes of short stories, and two nonfiction books. She has been nominated for the Rhysling Award for speculative poetry several times, and her book of poetry, Paranormal Romance: Poems Romancing the Paranormal, was nominated for the Elgin award. A retired college English professor, Denise speaks at various conferences and conventions, including the Newport Beach Writers’ Conference, The World Fantasy Convention, Westercon, The Stoker Convention, and many more. She lives in Los Angeles’ beautiful South Bay region, but her heart is in New Orleans.

Brandon O’Brien is a writer, performance poet, teaching artist and game designer from Trinidad and Tobago. His work has been published in Uncanny Magazine, Fireside Magazine, Strange Horizons, Reckoning, and New Worlds, Old Ways: Speculative Tales from the Caribbean, among others. He is the former poetry editor of the Hugo Award-winning magazine FIYAH: A Magazine of Black Speculative Fiction. His debut poetry collection, Can You Sign My Tentacle?, is out now from Interstellar Flight Press.

Katherine Quevedo was born and raised just outside of Portland, Oregon, where she works as an analyst and lives with her husband and two sons. Her poetry has received an honorable mention in the Helen Schaible International Sonnet Contest, been nominated for the Pushcart Prize, and appeared in Heroic Fantasy Quarterly, The Common Tongue Magazine, Coffin Bell, Eye to the Telescope, The Periodical, Forlorn, and elsewhere. Her speculative fiction has appeared in Fireside Magazine, Best Indie Speculative Fiction Vol. III and IV, and elsewhere. When she isn’t writing, she enjoys watching movies, singing, playing old-school video games, belly dancing, and making spreadsheets. Find her at www.katherinequevedo.com.

Looking forward to a great event!